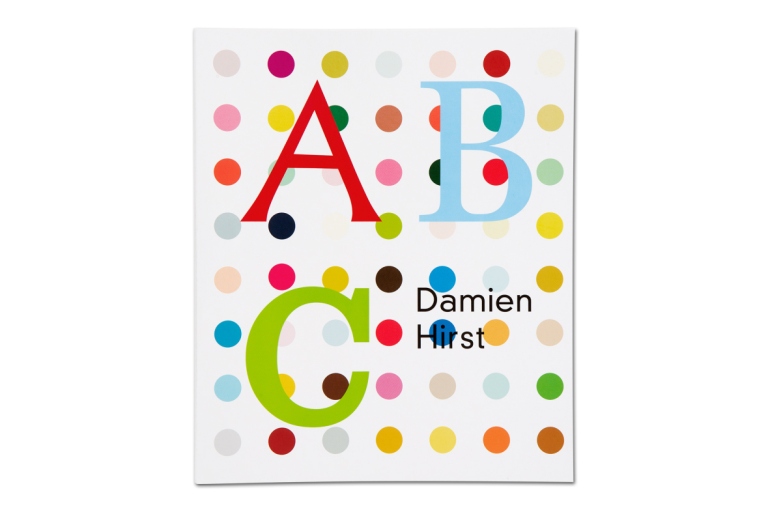 There are many roles by which Damien Hirst is remembered; the man who chain saws cows in half, or the man who made £50 million by encrusting a skull with diamonds. But, now he’s keen to add to this persona the role of being an educator of children.

The unconventional artist’s first children book, ABC, was released yesterday. When news of this project broke, art and literature critics were dumbfounded. For such a maverick man to enter such a mainstream model seemed impossible. What would the blurb consist of, I wondered, ‘The cat sat on the mat, was sawn in half and suspended in formaldehyde in the Tate Modern’? 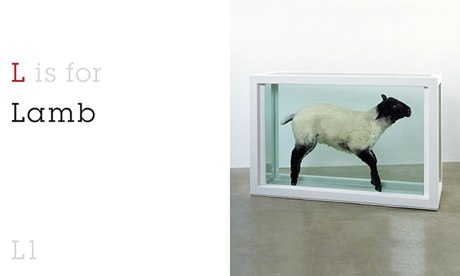 L is for Lamb, from ABC by Damien Hirst

The alphabet book is composed of pictures of Hirst’s work representing each letter with pieces from his earliest to most recent work spelling out the entire alphabet across 26 images.

The forty eight year old artist, who is a father of three sons, explained the impact of art on his earliest childhood memories, “I was brought up Catholic, and I felt the power of art from a very young age – seeing the brutality of all those images of flayed apostles and tortured saints was a pretty strong introduction.”

“What would the blurb consist of, I wondered, ‘The cat sat on the mat, was sawn in half and suspended in formaldehyde in the Tate Modern’?” 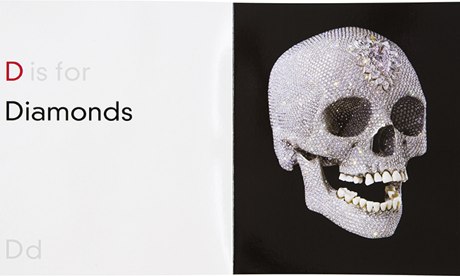 D is for Diamonds, from ABC by Damien Hirst

The book’s publishers described the work, “ABC is a new colourful way to look and learn about the English alphabet”. Their choice of the word ‘colourful’, perhaps deliberately playing on its connotations as a euphemism of whacky behaviour as much as to the hues of the book’s ink.

This latest revelation from Hirst seems, on the face of it, like another shock tactic; just when we thought he could not shock us any further, he instead offers us something so tame, so mainstream that it becomes, unexpectedly, the most shocking thing he could possibly do.

As a children’s book, I’d absolutely welcome this addition to the market of often tame and mudane offerings. If the book succeeds in opening children’s eyes to visual culture and causes them to question art (even if that question is- why on earth did that man cut a cow in half, mummy?), then it is a very worthwhile project from Hirst. 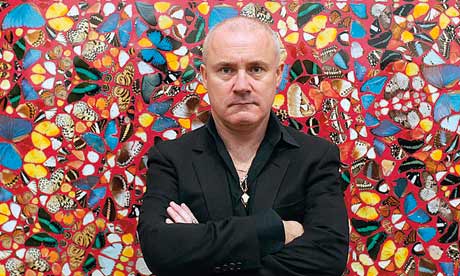 The main question is, however, whether the books will ever reach their proclaimed target audience. One art lover voiced the concern that this book would only ever grace “the coffee tables of middle class, yuppie art lovers”. With its £15 price tag, it does offer an opportunity for art lovers to get a slice of Hirst for a mere snip of the price of his £50 million skull, for example. If this book only serves as another status symbol for art collectors, it may only increase the reputation of Hirst as commercial tour de force first, artist second. However, if this book does manage to make it into the bed time reading routines of families, they will be introducing their children great starting point for cultural and creative questioning.

You can buy your copy online by clicking here.

What do you think of Damien Hirst’s children’s book? We’d love to hear your thoughts! Comment below or click here to join the conversation on the Fawn Review facebook page!