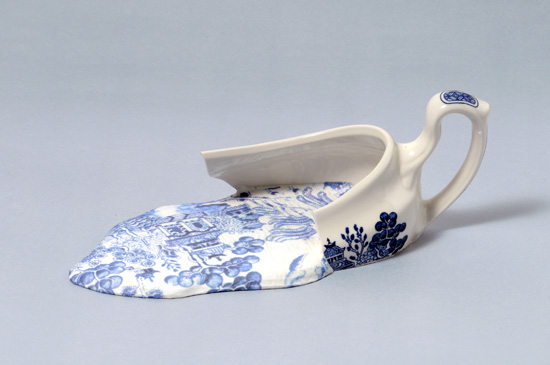 The Chilean artist’s works see crockery turn into the liquid form it houses; a gravy dish oozes with the creamy texture of the sauce itself, whilst tea cups themselves threaten to spill and splash with their liquid shells. 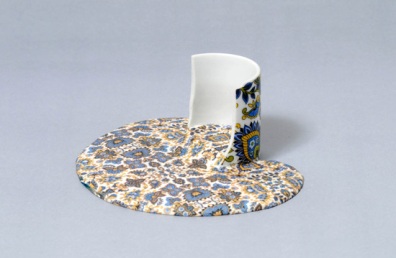 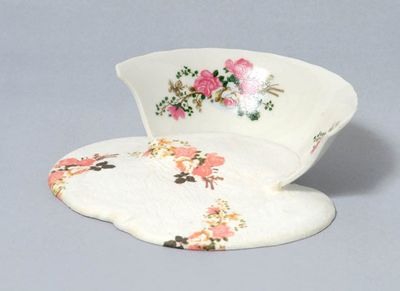 Marin’s work attempts to highlight mass consumerism and mass production. We are so used to throwing away any item which we deem slightly defective, yet here the disintegration of the objects is what is celebrated in all its odd glory.

Her works use a print called ‘Willow Pattern’ which was first introduced to Britain’s consuming public in the Victorian era by industrialists copying the Chinese print onto lesser quality goods for mass production in the UK. For Marin, this print is therefore symbolic of the first forays into mass production at the hands of unique quality.

In the two centuries since that first ‘Willow Pattern’ ceramic was churned out in a factory, the print has been produced and reproduced so many times as to verge on cliché. Marin’s works seek to reclaim the print as something that can tell a new and unique story. By twisting the ceramics so much that they are not fit for purpose, Marin instead makes them fit for contemplation.

What do you think of these images? We’d love to hear your thoughts! Comment below or click here to join the conversation on the Fawn Review Facebook page!